We have recently been noticing some mysterious clutch shoe issues arise, which a few of you have experienced first hand, while a majority of you have had no trouble at all. In an effort to understand the discrepancy, we have done some research to understand what was causing this seemingly random situation.

After ruling out the overall design and spring which has been fantastic, we discovered that Stihl, The manufacture of the shoe has changed the metal composition of their shoe without notifying anyone.

I assume this was a cost cutting exercise by Stihl and probably doesn't affect them for their purposes! However this has really had us confused until we had some shoes tested to find out the truth. After inspection of the failed shoes we discovered that this new compound they switched to was causing the shoe itself to deform from the heat causing binding/slippage and ultimately not functioning. The frustrating part is that there is no visible difference to the shoe to be apart to set them apart.

The good news moving forwards is that we had already been working to develop our own unique sintered metallurgy and a custom RC clutch shoe, to release as a V2 clutch, so we can use this to solve the issues.

The 62mm clutch size is, as most of you RCMAX owners know, a fantastic balance between bite/slip and offers a really positive action without excessive drivetrain load, so we are naturally sticking to this proven design but with thew new near 15mm wide shoe to offer better performance.

This new powdered metal is pressed into our own custom mould and then Sintered to achieve the end product. The design was developed from numerous steel prototypes (see example pictures of a few versions) which have been tested over the last couple of months. A big thanks to Rodney, Willie, Tommy, Ben, Simon to name a few who all helped us learn and gain feedback as we made changes to the design.

The result is a high-density thermally-stable Sintered Steel clutch shoe (see photo of some shoes undergoing final processing at the moment). This mixture has been developed for us by an experienced friction material manufacturer and will offer a much improved bite over the Stihl shoes. An awesome clutch upgrade for all RCMAX engines and also a solution for those handful who were unlucky to get the bad clutches.

In an effort to thank everyone for their incredible support of RCMAX since we re-launched, anyone who has purchased an engine with the 62mm clutch, regardless of if you had trouble or not, can claim a free set of the new shoes once the production batch are finished in a couple of weeks. We will announce when this is, so no need to contact us yet please. They will of course be available as spare parts aswell at just £29 a set.

We have a small batch now undergoing final processes that we are working on releasing to the unfortunate people that did encounter the faulty material that was provided to us by Stihl. You will be contacted shortly please bear with us.

Finally we have also commissioned Blackbone to make us some hardened 62mm bells from a steel which has proven to work better with the new RCMAX clutch material, to further increase performance if desired. These have been underway for some time and should be ready soon.

Keep an eye out because we have lots more behind the scenes development going on, RCMAX is dedicated to constant improvement. Similar to the new RCMAX Reeds and new shoes we are excited to continue advancing our products (including backward compatibility) to always bring you the best Big Bore RC engines and parts that your money can buy. 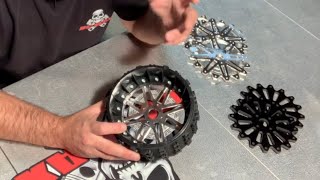 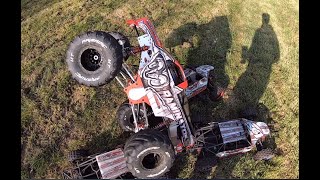